After 21 years at the helm of Ransome’s Dock in Battersea, Martin and Vanessa Lam are finally shutting up shop in August.

They first worked together for 1970s food pioneer Justin de Blank before Martin went on to open both The English House in Chelsea with Malcolm Livingston, and then Le Caprice with Chris Corbin and Jeremy King; From 1982-92 he was part of a very successful triumvirate alongside Nick Lander and Elena Salvoni at L’Escargot in Soho.

After it opened in 1992,  Ransome’s Dock was often cited in the press as the blueprint for a neighbourhood restaurant, as well as becoming ‘the canteen’ for those working in the British wine trade as a result of Martin’s growing fascination with wine, winning numerous awards for the wine list and the food over the years.

Martin & Vanessa explained  “It has been an extraordinary experience to be here for this length of time, and to watch the number and quality of so many other London restaurants develop. We’ve decided that now is the time after 21 years to slow down a bit

We have worked with some brilliant staff over the years – some of whom are still with us here since the very beginning – and it’s great to see others doing so well now on their own, all over the world. Like all good restaurants, we have been fortunate enough to have had a really strong front of house team over the years whose part in the restaurant’s longevity must also be acknowledged.

Our customers have also been wonderful. They have really got it; the seasonality, the traceability, the sustainability that are now all part of the zeitgeist. This is how we were brought up and schooled by Justin and others, all those years ago, and what we have tried to pass on to all who worked here and trained here as apprentices over the years.

It’s really good to see how a new generation of cooks has got this message and are continuing to develop it further: just look at the Quality Chop House or 10 Greek Street right now as a shining examples of how to get it right without compromising.

We must thank the large number of small growers and specialist food producers, numerous wine makers from all over the world, all of whom have contributed so much to the success and enjoyment of our customers at Ransome’s Dock with their continued input and support.

These relationships are what all good restaurants should depend upon, and we are grateful to you all”.

Our last service will be on Sunday 11 August and we would love to see as many of you as possible before then, so do come and pay us a visit – we have some special events planned for the summer, including a dockside barbecue on Saturday 6 July. 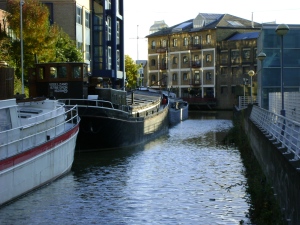